INDYANA JONES AND THE TEMPLE OF SCIENTOLOGY

Indyana Jones: Probably one of greatest archeologists of all time.
Skilled in the ancient traditions of all world cultures. He is
an expert in navigating all kinds of dangerous terrain, traps, and puzzles
and puzzles to recover icons, idols, and other artifacts of time transcendant value.

At first it would appear that Indy would be out of his element with this new
approach to religeon. On further inspection its not that new at all. Some elements of
truth, mixed in with an individual perspective associated with the totality of truth
and a cumulative control mechanism for all members. In this case the hidden sacred
texts describe alien's in silver suits colonizing the earth and causing us psychic
problems.But does that matter to Indy? Hell no. Let's face it. Indy blazes in. Bumbs
off any of the faithful or hollywood celebrities that get in his way. He dodges lawsuits
and the lawyers. He escapes with the sacred texts leaving behind the explosive reminders
of his presence.

Connections
The Bridge: Of all the ideas that stay the same, those of religions are the most
consisent, whether they are quality ideas or not.Heroes like Indyana Jones bridge
ancient ideas and modern ideas, high culture and popular culture, eternal ideas and
the expressions of the moment.

Relationship to the CoreWave: Indyana Jones found the ark of the covenent, a shiva lingam, and
the holy grail.I mean come on. Some majorly lasting icons there.Besides he looked really cool through
it all and kicked
some major bad guy butt. -- r.c.c. 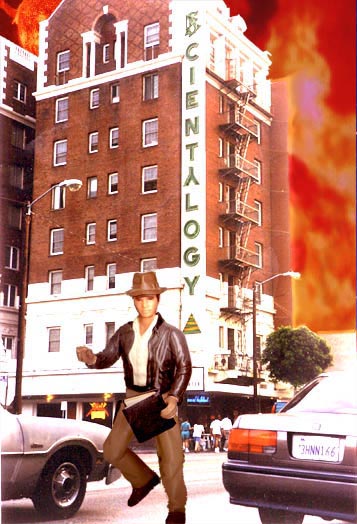